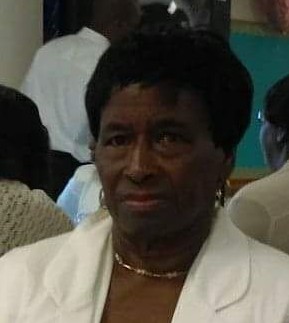 The Lord softly whispered the name of his humble servant,
Virginia Williams Stewart, and she slipped away peacefully to be with Him.

Virginia was born on May 25,1930 in Princess Anne County, Virginia, the daughter of the late MacArthur Dailey and Beulah Williams.

She was married at a young age to the late Rudolph Stewart, Sr., and together they were the proud parents of ten children, nine of whom lived to adulthood.

Virginia held various jobs throughout her life, including being a housekeeper and cafeteria worker, finally retiring from the Environmental Services Department at Sentara Bayside Hospital.

She gave her age to Christ at an early age and was a faithful member of Morning Star Baptist church, where she sang in the Celestial Choir and, for a time, served in the Nursing Ministry. She continued to sing in the choir after overcoming serious health challenges, and was an active member until her health would no longer allow her to continue to do so.

Virginia was, also, a member of the Senior Group, which met at the church on Tuesdays. She thoroughly enjoyed being a member of the group, and looked forward each week to spending time with her Senior friends and the various activities that they engaged in.

Before her passing, Virginia had the distinction of being the oldest member of Morning Star and, thus, had the honor bestowed upon her as being recognized as the Mother of the Church.

At 91 and a half years of age, Virginia was the matriarch of her family. She led her family by example with quiet dignity and grace, imparting upon them countless pearls of wisdom.

Virginia truly loved the Lord, and dedicated most of her life in service to Him at Morning Star. Her life, essentially, revolved around her Faith, Family and Friends.

Expression of Gratitude
The family of the late Virginia W. Stewart wishes to express their heartfelt gratitude and appreciation for all acts of sympathy, love and kindness extended to them at this time. May God continue to bless and keep each and everyone of you.

To order memorial trees or send flowers to the family in memory of Virginia Williams Stewart, please visit our flower store.