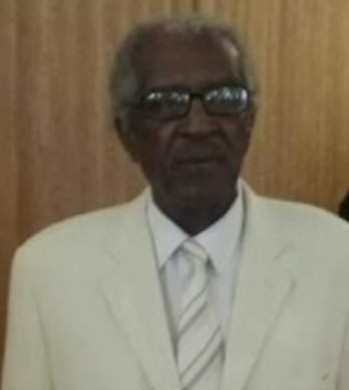 On Sunday, October 23, 2022, our beloved Samuel quietly completed this earthly journey, and answered God’s call to lay down his burdens and enter eternal rest.  Reverend Samuel Baker, who was affectionally known as “Sam,” was born July 3,1931, to the late Annie Elizabeth Fairley.  He was reared by his grandmother, Janie Baker in Princess Anne County, now known as Virginia Beach. He was educated at Princess Anne County Training School.  After his high school graduation, Sam joined the United States Army.  Later, he was employed with the Civil Service at Naval Air station Oceana, Virginia Beach General Hospital, and the City of Virginia Beach.

Sam accepted Jesus Christ as his personal Savior at a young age and joined Little Piney Grove Baptist Church.  He often shared fond memories of walking to church with his “Momma Janie” to play the piano.  He became the musician for the church choirs at the age of nine and played until he joined the military.  Through the years, Sam worked with various ministries, including Trustees, Choirs and Sunday School, he was the musician for the #2 Choir, Male Chorus, Junior Choir, and Youth Choir.  Under the administration of Pastor Ajack Scott, Sam became a licensed minister and served as a Ministerial Associate for many years.  To further develop his preaching craft, he attended the Evans Smith Institute of Theology.  Reverend Baker was Sunday School Superintendent and taught the Men’s Sunday School Class.  He especially liked studying and preaching on the subjects, of love, and faith (Hebrews 11:1 and 6 and James 2:17).  He thoroughly enjoyed the study of the Old Testament.

His “claim to fame” was music, especially playing the piano.  With his unique style, he played like no one else, combining jazz, gospel, country, and rhythm and blues.  He stomped his feet, with excitement, to the beat, and reminded his audiences of Ray Charles.

Sam met and married the love of his life, Hannah L. Hoggard (Pinky) and to this union four children were born.  While married, his love for music was ever present.  As a couple, Sam and Pinky travelled to Washington, DC to sing LIVE on radio.  These stations broadcasted to Norfolk, VA, which allowed this area to hear Sam and Pinky sing on radio station WRAP.  They were offered a record deal but refused it because of their parental responsibility to their four young children.  Shortly thereafter, within the family unit, the Baker Singers were established.  They were well known for their gospel singing.  Years later, he formed the Jr. Baker singers amongst his grandchildren.

Sam enjoyed fishing, playing dominos, playing checkers with his brother, James, and spending time in conversation with his brother Jesse.  He supported his wife’s interest of growing and selling produce under the business handle of Hannah’s Produce.

Let not your heart be troubled ye believe in God, believe also in me.  In my Father’s house are many mansions: if it were not so, I would have told you.  I go to prepare a place for you. And if I go and prepare a place for you, I will come again, and receive you unto myself that where I am, there you may be also.  John 14:1-3

To order memorial trees or send flowers to the family in memory of Rev. Samuel Oliver Baker, Sr., please visit our flower store.