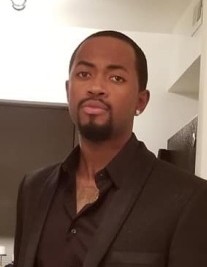 He was a hard worker, from a busboy, movie theater crew member, all the way up to an assembly worker at Stihl. Quinton LOVED spending time with his wonderful daughters. He enjoyed picking on his older sister because he was taller than them. There wasn’t a dance out that he hadn’t practiced and then mastered to show off at ALL the family functions.  Quinton was always trying to bench press people because he thought he was so strong.  He didn’t mind lending a helping hand to anyone in need.

He is predeceased by his father, great grandmother Rebecca White, and grandmother Mary Ann White. He leaves behind his amazing, beautiful, and loveable daughter’s Aaliyah, Aubree, and Ava White. His mother Janet Dixon and step-father Dominic Dixon.  His sisters: LaTasha White, DaShanta White, and Ashley Davis.  Candace James, Quinton’s girlfriend of many years.  Also, Thomas James, a special man that guided him into man hood.  And a host of uncles, aunts, cousins, and friends that loved him.

The family asks that you keep them in your thoughts and prayers.

To order memorial trees or send flowers to the family in memory of Quinton Diamante White, please visit our flower store.