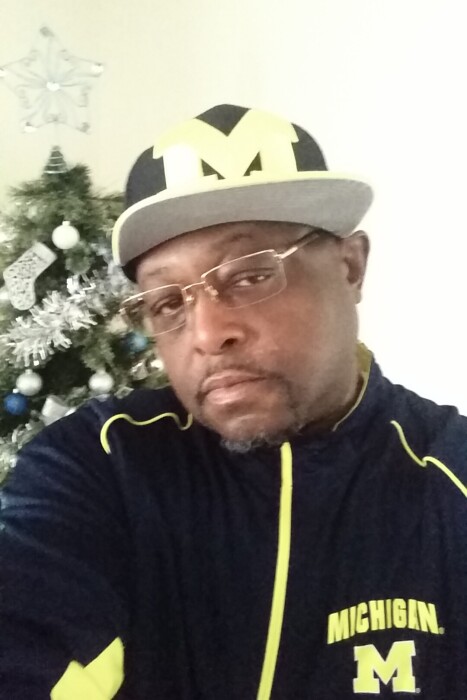 Jeffrey Arthur Harvey was born on August 26, 1962 in Detroit, Michigan. He was raised and loved by his mother Sandra Delores Moore who proceed him in death and his father Comer Moorer. Jeff had three sisters: Regina, Angela and Sharona, who all proceeded him in death.

Jeff graduated from Cooley High School in 1980 in Detroit, Michigan. He later that year joined the military where he signed under the Marine Corps Reserves on October 10, 1980, serving six years. Jeff received an Honorable Discharge of service on February 10, 1987.

Jeff knew and accepted Jesus as his Lord and Savior! Jeff was a loving husband, father, grandfather and friend. Jeff moved to Virginia Beach, Virginia marrying the love of his life of 11 years, Mia Harvey.

Jeff worked for STIHL Incorporated, where he worked as a skilled CNC machinist for the past 14 years. Jeff was a very hard worker and he loved to spend time with his family and friends. He enjoyed fishing and bowling where he bowled in many leagues.

On May 15, 2020, Jeff departed this life to be with the Lord. He leaves to cherish his memory: His loving wife, Mia Harvey. Three daughters: Tinea Harvey, Shaunda and Shameka Shamily. His son Daniel Price, who proceeded him in death. Two stepchildren, Shana Granger and Kayla Rice. Seven grandchildren, Daniel Price, Jr., Jalyn and Jayla Radford, Antonio Shamily, Martino Shamily, Brooklyn Fordham and Jeremiah Granger; and a host of other relatives and friends.

On behalf of the family, we encourage you share your personal experiences and preserve the memory of Jeffery for future generations to come.

Be the first to post your most treasured memory of Jeffery. Show your support by sharing a personal message or story on the tribute wall, meaningful photo or video, and/or sending a gift or flower.

To order memorial trees or send flowers to the family in memory of Jeffery Arthur Harvey, please visit our flower store.