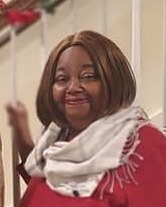 Gladys grew up in Portsmouth, Virginia and was educated in Portsmouth Public Schools. She attended Norfolk State College, Norfolk, Virginia, but received her BS degree in Organizational Management and Development from Bluefield College in Bluefield, Virginia.

Gladys’ management skills led to several contracting positions over the years. Her cheerful and friendly nature was always appreciated by her family, friends and co-workers. Gladys was an advocate for many co-workers on her jobs, whether it was defending them or comforting them.

She was a faithful member and servant at Trinity Temple Church, Portsmouth, Virginia, where Bishop Benjamin Adamson, Jr. is the pastor. Gladys was a licensed Evangelist, and she served faithfully in various ministries at her church, even when she was dealing with her health problems. We may not be able to hold her in our arms, but we will always hold her in our hearts.