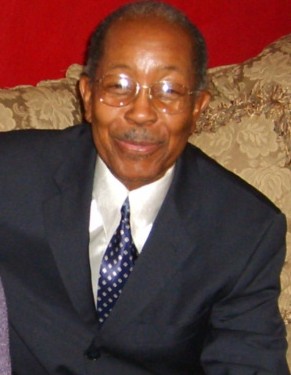 Elder Frederick L. Hobbs Sr., was born April 8, 1935 in Norfolk County Virginia to the late Charles H. Hobbs and Ruth Hobbs. He was the fourth born of four children. He attended the Norfolk County Public School System as well as the Catholic School system.

In his youth, he gave his life over to Jesus Christ, to serve and be used of Him. At age fifteen he started going around with other Elders, to churches aiding in whatever way that was needed. Being baptized as well as filled with the Holy Ghost and walking in the ways of righteousness for 71 years, he found out and lived what the word of God instructs us to do and be.

He was a member of Bibleway Holiness Church of Chesapeake, Va., for nearly 40 years under the pastoral guidance of the late Bishop William J. Faison. He was a willing and faithful ordained Minister and later was ordained Elder. He readily participated in many parts of the ministry: including preaching, baptizing, giving communion to the sick and shut-in, playing the guitar and being available in whatever capacity that was needed. Knowing God's word and praising God were very prevalent in his life. He avidly enjoyed praising God with clapping of hands, singing, dancing and playing musical instruments. He loved playing the guitar and the tambourine. He would play the guitar, in church services as well as at home. It always brought him joy and a closeness with the Lord. He shared his love for guitar with others by teaching those who were interested, how to play the guitar.

Although serving God and being used in the work of the Lord was his life, it didn't stop him from being a devoted Husband and the greatest Dad, Granddad and Great Granddad. There was never a time that we were in need, that He didn't provide whatever he had that could be of help. He worked for the City of Norfolk for many years and later went to school to study nursing and became a Certified Nursing Assistant. He worked for Senior Services using his nursing skills until he retired.

Growing up, Dad always made sure that we had clothes, food and shelter. He enjoyed baking pies, cakes, biscuits and cooking sweet potato jacks. It pleased him to bring others joy even if it was through your palate. He was a good steward over what God gave him to provide for His family. He not only provided for our needs, but he strove to obtain our wants and desires as well. Being conscious of our physical needs as well as our cognitive and mental needs. He would provide a listening ear or needful advice for whatever topic or problem that arose. He loved to laugh and bring laughter to his children, grandchildren and great grandchildren. He held, played and comforted if needed, his children, their children and their children's children.

Being acquainted with struggle didn't hinder or deter him. Through it all, it allowed him to know what it meant to have faith and trust in God. He gave his great life of faith as an inheritance to his children, grandchildren and great grandchildren, of whom he actively demonstrated this character before.

"For the promise, that he should be the heir of the world was not to Abraham, or to his seed, through the law, but through the righteousness of faith" Romans 4:13

We will forever cherish him in our hearts and minds

The family would like to thank everyone that sent prayers, cards, flowers, words of encouragement and all the many types of support to our family during this time.

We love you all and appreciate you thinking, caring and sharing with us.

On behalf of the family, we encourage you share your personal experiences and preserve the memory of Frederick for future generations to come.

Be the first to post your most treasured memory of Frederick. Show your support by sharing a personal message or story on the tribute wall, meaningful photo or video, and/or sending a gift or flower.

To order memorial trees or send flowers to the family in memory of Frederick LaWarren Hobbs, Sr., please visit our flower store.