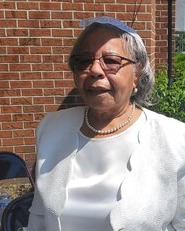 Barbara Anne Gatling Ormond was born on January 26, 1938, in Sunbury, NC to the late Charlie Eugene Gating and Annie Viola Jordan Gatling.  She was the second of four children.  She peacefully entered eternal rest on January 9, 2023.

After graduation from Norfolk State University Barbara moved to Brooklyn, NY where she met and married the love of her life Matthew (Mack) Ormond in 1961.  Barbara and Mack were married for 52 years and had three (3) daughters Barbara (Diane) Ormond-Bennett, Jill K. Ormond-Wright, and Myra A. Ormond-Pitts. Eric Jermain Lee joined Barbara and Mack’s family after the passing of his mother Dot.  Eric’s older brother Randy Lee also lived with Barbara and Mack over the years.

Barbara and Mack were avid bowlers, winning many trophies on bowling leagues.  She loved to sew and often made outfits for her children, grandchildren, and sister.  Barbara also made dolls for several family members.

Barbara was fond of cooking; she made delicious pies and cakes from scratch.  She was delighted to receive and cook special requests for chicken and dumplings, bread pudding, and other homemade meals.  She cherished having family and friends in her home to enjoy food, reminisce, and play various games.  She loved to use her fine China and have the dining room table nicely dressed for meals on special occasions.

Barbara attended I.C. Norcom High School in Portsmouth, VA; graduated from Crestwood High School in Norfolk County, VA (now Chesapeake City) in 1956; and graduated from Norfolk Division of Virginia State College (now Norfolk State University) in 1960 with a Bachelor of Arts in Sociology degree.  She received her Master of Science in Education degree at Fordham University in New York.

Barbara was a social worker in White Plains, NY.  She served as Director of Community Daycare Center in Brooklyn, NY where she also taught preschool.  She retired from the New York Department of Health in 1990.  Barbara was the Director of the School of Excellence at New Light Baptist Church in Virginia Beach.

Barbara was also an active member of AARP of Virginia Beach and the New York Exchange.

Barbara was loved, adored, and cherished by her family and all who came to know her.  Her legacy will forever live and she will be truly missed by all the hearts she has touched over the last 84 years.

On behalf of the family, we encourage you share your personal experiences and preserve the memory of Barbara for future generations to come.

Be the first to post your most treasured memory of Barbara. Show your support by sharing a personal message or story on the tribute wall, meaningful photo or video, and/or sending a gift or flower.

To order memorial trees or send flowers to the family in memory of Barbara Anne Gatling Ormond, please visit our flower store.